About the Author: Lammert Bies is a dad, husband and polyglot. He is developing embedded systems since the eighties. Used machine learning before it had a name. Specializes in interconnecting computers, robots and humans. Was a Google Mapmaker Advocate and speaker on several international Google conferences from 2011 until the plug was pulled on Mapmaker in 2017. Currently spreading artificial intelligence to the wildest locations in production environments. He never stops learning.

Most PLC’s can be programmed from a PC via a serial cable. Unfortunately, many of these cables have a non standard layout. The cables shown here can be bought from the regular sales channels, but it is often much cheaper to solder them yourself.

Most programming of Siemens S5 PLC’s is done using a special RS232 to TTY converter. The S7 series are programmed using a RS232 to MPI bus converter. The easiest thing to do is buy these special cables from your local Siemens supplier. The operator terminals however can be programmed using a normal serial cable. The following cable can be used to program the OP series of operator displays.

Idec / Izumi PLC series FA2, FA2J and FA3J all require a special communication adapter for programming. This communication link adapter (CLA) is a small box that converts the RS232 electrical signals into a compatible level for the PLC. The cable to connect the PC to a CLA uses a DB25 connector at the PLC side. The layout for a cable with a DB9 connector at the PC side is shown here. 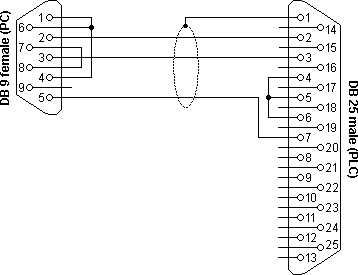 The main difference in programming a PLC is that most micro-controllers, including those from Z-World, are programmed in C. The Z-World programming package runs on a normal PC and the connection with the controller is made using a serial cable. This cable needs a DB9 connector at one and, and a RJ14 plug at the other. The pin out of a programming cable is shown here.